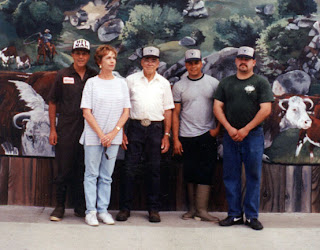 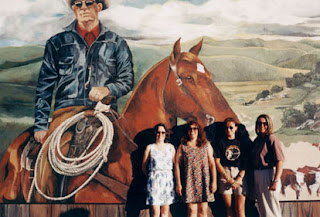 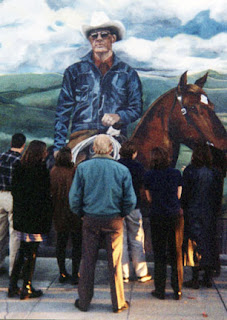 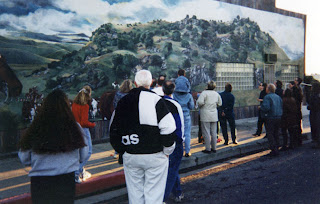 I DID IT. 2 days left. I leave on Saturday. Got paid today. My family came, tried to find Ron hidden on the hill. My best friends from High School came. And all my co-workers from Jostens came. What a surprise! Scotland- here I come!

Posted by Nadi Spencer at 2:47 PM No comments:

I CAN PAINT fast. Just 2 weeks left before my flight. Just do it! 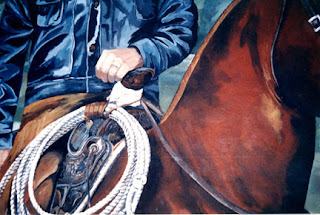 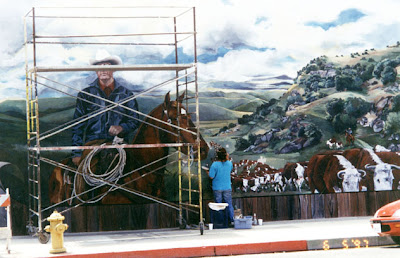 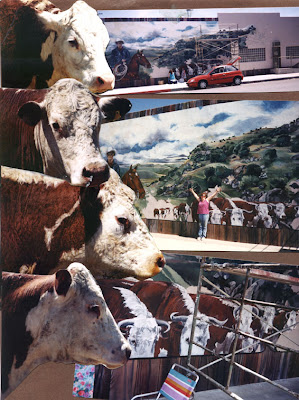 Posted by Nadi Spencer at 2:37 PM No comments: 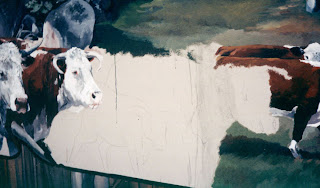 THE WALL. The Exeter Meats and Processing, owned by Joe Luiz. Pretty daunting. My first time on the scaffolding I couldn't get to the 2nd level. I just stood there on the plank, looking up (as if I was concentrating on my design), afraid. It turned out the screws were all loose and scaffolding IS NOT SUPPOSED TO SWAY! A friend went home for his tools, then came back to fix. Whew! 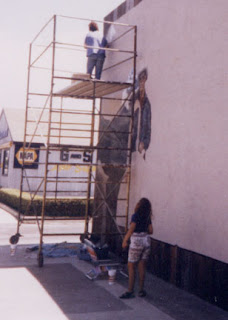 A FRIEND, Tony Avila, helped me project the image onto the wall at 3 am, which was the only time the police would let us do it. The projector sat atop my truck in the middle of the road, while we projected in 10 foot increments, backing up the truck each time. Tony lined up the faces of the cows where the sections met. Problem was- all the cows looked similar - and he matched up the wrong ones, cutting out about 5 foot of mural. I didn't discover the mistake until a week later (and decided close enough!) 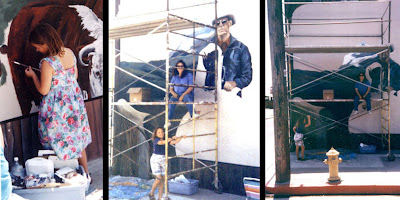 BRONWEN was 9 at the time. And a huge help. Her famous line was "Mom- just do it. If you start, you know you always find a solution." What would I do without her?
Posted by Nadi Spencer at 2:11 PM No comments:

I NEEDED $800 to pay for a flight to Scotland. I had purchased the ticket but had not payed for it yet. My flight left on June1st, the trip would be for a month. I had no money, and a little more than a month to find it. I had just finished reading Outlander, by Diane Gabaldon, and the Celtic music was calling me. Ah, the life of an artist.

THAT'S WHY I accepted my first mural job. I didn't know how to paint a mural. They're so BIG. It was actually Colleen Mitchel-Veyna, a local muralist and friend, who gave me the nudge I needed. I was commissioned to do the next Exeter mural. I was given 10 photos, not at all related to each other in time or subject matter, and told to come up with a cattle mural. Well, I don't work that way. I told the committee that I would design a mural my way; if they weren't happy, they didn't have to pay me. They agreed.

THE GILL FAMILY came to my rescue. I knew the Gills and thought painting Adolph on his horse, leading a herd over Rocky Hill, was just the thing. Son Fred took me on Rocky Hill and showed me a normal path route and corrected any misguided ideas I had about where the cowboys would be located around the herd. Daughter Linda helped me photograph authentic saddle, rope and bridle, using her father's gear. And, finally, before I was finished, wife Clorie brought me a list of all the changes I needed to make on his face (I believe there were 13). 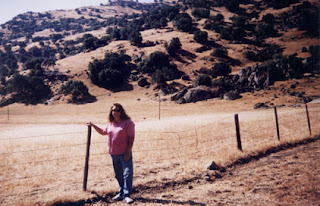 I ASKED a lot of questions. There was a lot to learn – what kind of horses did Adolph's crew ride in the 50's? – what kind of cows did they run back then? I LOVE researching a mural! I was ready.
Posted by Nadi Spencer at 1:48 PM No comments: